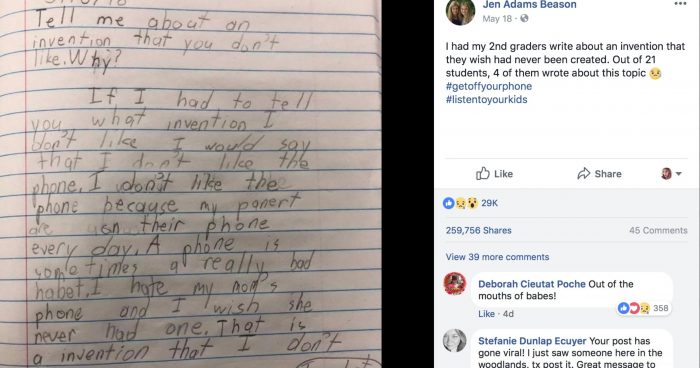 Second grade teacher Jen Beason asked her students to write about an invention they wished had never been invented.

Four of Beason’s students wrote that they wished their parent’s phones had never been invented. Why? Because their parents spend more time staring at their phones than they do talking to their kids.

Beason posted about her students’ responses in a Facebook post, “I don’t like the phone because my [parents] are on their phone every day … I hate my mom’s phone and I wish she never had one,” said a student in a picture Beason’s posted.

Many others weighed in. A fellow teacher wrote, “We had a class discussion about Facebook and every single one of the students said their parents spend more time on FB then they do talking to their child. It was very eye opening for me,” Abbey Fauntleroy commented.

It’s a sobering reminder that our kids need our time and our attention. It’s time to put down our phones and plug in our children’s lives.

Set aside time each night to devote to your children. Put the phone away, out of reach, so you won’t be tempted to use it. Your children deserve your undivided attention and time. 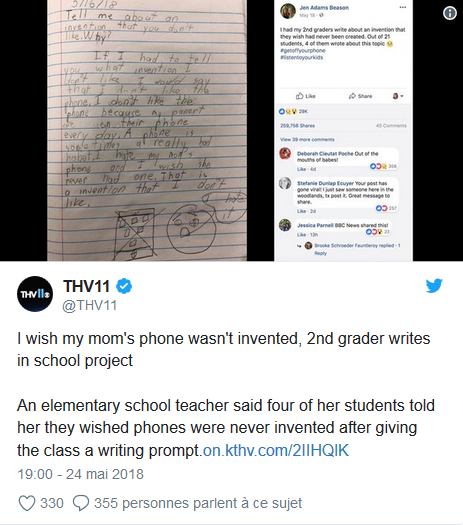