If you ask them what they enjoy doing in their spare time, most youngsters will tell you how they love watching TV, playing computer games, or hanging out with friends. There are also those, however, who dedicate their free time to unusual hobbies for someone their age.

In an episode of Antiques Roadshow, a young boy who explained how he loved collecting and selling glass, sterling silver, and art, appeared with a painting which he bought at an auction for just 2 bucks. He wanted to meet the experts and learn whether the painting was worth any money. 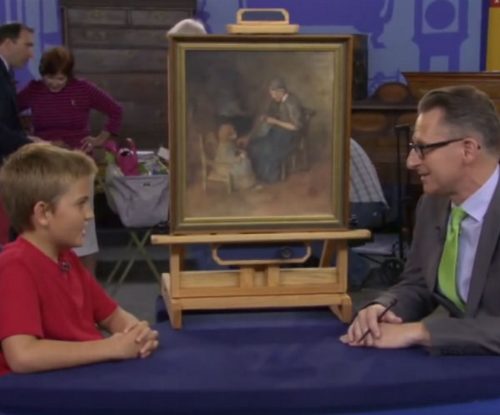 Speaking to host David Weiss, the boy explained how he believed the painting was in watercolor but he couldn’t tell for sure because of the UV glass. Weiss confirmed the boy’s thoughts and went on to ask him whether he could tell how old the painting was.

It turned out that the beautiful piece of art was painted during the late 19th century by the Dutch artist Albert Neuhuys who had signed it in the lower right-hand corner.

The boy’s fascination grew bigger and bigger as he listened to Weiss reveal more and more interesting facts about the painting, but little did he know that he was about to hear even more stunning information about the treasure he found in South Jersey.

Hearing the worth, the boy was left in complete shock as Weiss concluded that he would make an awesome antique dealer in the future. The painting was estimated at around $1000 to $1500. Not bad for a piece bought for two bucks.

For the boy’s reaction go to the video below.