If everybody was nice to each other, the world would be a much better place. Holding a door for somebody, giving money to charity, even just smiling at somebody who looks down can be great ways to help somebody out.

If humans were nice to each other, the world would be a much better place. Give up your place for an elderly or a pregnant woman while in the bus, giving money to someone in need, even smiling to someone who looks down while walking by can make this person’s day better.

And this is exactly what FOX5 Surprise Squad does, the difference is that these good people can do a lot for someone in need or who deserves it after a long struggle. Spreading kindness and good gestures around the country to inspire the world to do the same is what FOX5 Surprise Squad aims for. So the team decided again to make someone’s life better and headed to a busy grocery store in Las Vegas.

They approached some of the shoppers in the check-out line, but the team never expected they’d meet two inspiring local veterans. First, reporter Dave Hall met with Stephanie, a disabled veteran who was bound to a wheelchair.

Stephanie has dogs who love so much. This woman barely have enough money to feed herself and her dogs. Actually, she was spending from her last $50 that day. So Dave and his team happily paid for her grocery shopping. Then they noticed the man who had accompanied her to the store that day.

Larry is Stephanie’s husband, he was also a fellow club member and truck driver who was most of the time hitting the road. Larry was also a struggling veteran who gave a lot of his time to drive Stephanie wherever she needed to go. “No vet should be going through what she’s going through,” he told Dave and his team. 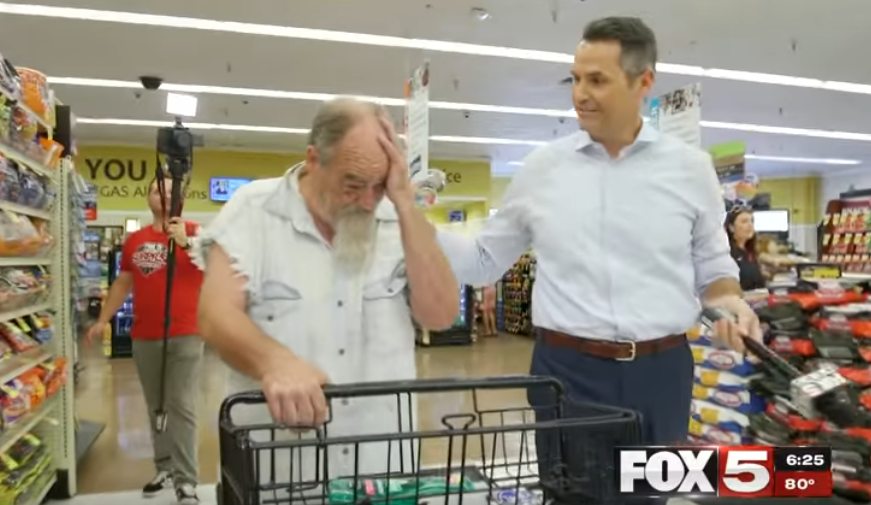 Unfortunately, Some of Larry’s brothers died in the Vietnam War. That’s what inspired him to create a charity called Bones for Blankets which donates blankets to homeless veterans.

Larry always put people in more need first. That’s why he was very low on cash. The only items he bought that day at the supermarket were a piece of candy and some mouthwash. Once Dave and the Surprise Squad heard Larry’s story, they decided that this wouldn’t do. They immediately took Larry back down the aisles of the supermarket to make sure he gets what he needs.

Watch what the Surprise Squad has in store for Larry in the video below: