Do you ever wonder how good parenting works? Well, I guess the most logical answer would be by setting examples and encouraging our little ones to follow them. This is exactly what one generous man did when he found himself surrounded by a group of military members.

Brothers Jonathan and Stephen Full were enjoying their meal together with their children when a group of soldiers entered the Chik-Fil-A restaurant. Jonathan knew this encounter would be the perfect opportunity for him to fulfill one of his dreams and at the same time teach his son a valuable lesson.

Having deep respect for everything these brave men and women do for the safety of our country, Jonathan was always looking forward to the chance of buying a soldier a meal. Now he got to do it not once, but multiple times. He told WTVD:

“It’s always been on my mind to pay for some military members’ meals when I get the chance. It just hit me real good in my heart to do it then. And it just happened.”

He decided to pay for the lunch of every member of the military that entered the place that day.

“Man is there a bus dropped off somewhere? Did we just hit the motherload here? What felt moving through my heart is I didn’t care if 200 more showed. I was still going to buy the meal.”

At the end, near a dozen meals were on Jonathan and he felt blessed he was given this opportunity to show these people how much he respected their sacrifice.

Stephen took some photos of this inspiring act and shared them online, writing how proud he was of his younger brother.

“As he paid for their meals, in remembrance of our late brother Joshua who suffered mentally from severe PTSD, he asked them to reach out to anyone they knew with PTSD and try their best to get them the help they needed. We thanked them for their service and left. Taught our boys to take care of the people that take care of us.”

Sadly, PTSD is likely to affect many members of the military, and Stephen wanted to raise awareness regarding the severity and the consequences of this condition.

People say how Jonathan’s act made him their hero. They all agree how every American should treat the military men and women with such respect. As for Jonathan’s son, he was a bit worried how all the food would be gone.

“What are ya crazy!? There’s not going to be any food left!”

He continued eating his chicken nuggets unaware that his daddy was now a local hero who inspired many to be more generous. 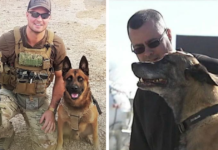 Foster mom enters Walmart with her kids, but mutters “I’m sorry” when she can’t pay for her groceries