The Super Bowl is here! One of the most anticipated events in the country is about to gather millions in front of their TVs on Sunday. And as most of them are there to enjoy the game and cheer for their favorite team, a great number of viewers are eager to check the commercials out.

Among the companies who were willing to pay millions for their products to be featured during the annual championship are the Doritos. And as much as their Nacho Cheese was in the spotlight for so long, they are now updating the flavor of their Cool Ranch. And the taste of it? Well, if two big names like that of 20-year-old rapper Lil Nas X and actor Sam Elliot are “fighting” for a bag of it, it has to be exquisite.

The two are dressed in their cowboy outfits, somewhere in the Wild West,  and ready to duel.

But instead of a game of quick draw, the pair gets into a dance-off battle. The song, as you are guessing already, is Lil Nas X’s “Old Town Road” that brought him two Grammy awards.

For Elliot, who is well known for his mustache and his roles as a cowboy, filming this commercial was a totally different experience from everything he’s done before.

“I was a little concerned about having to dance at this point in my life,” Elliott told Adweek. “I used to love to dance, I’ve always been athletic but, you know, at 75 things slow down… I wasn’t worried about opening my mouth and talking, but the dancing was a challenge.”

Elliott was first introduced to Lil Nas X’s music by his daughter and says working with the young rapper was a real pleasure. “I found him a pretty solid kid. He worked hard,” he said. “He’d never been in front of a camera on film set before, and he was up to the challenge. And he couldn’t have been nicer to be around.”

This is definitely worth checking out! 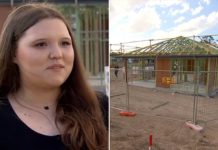