Apparently, all it takes for a dog to welcome itself in someone’s home, or in the case of this lovely stray, in someone’s car, is for the word food to be spoken.

When a man driving his car spotted a lovely black dog approaching his vehicle, he asked the animal whether it wanted something to eat. What the dog did next will amaze you. It liked the idea of having some food and jumped right into the car.

Honestly, it wasn’t something the man and his passenger expected for the dog to do. They were caught by surprise and admitted how they even got scared a little bit. Well, they obviously forgot that cats aren’t the only ones who get to choose their owners, some dogs do it too.

At this point, the man probably thought how offering food wasn’t the best idea, or maybe not, since they had lots of fun laughing.

It’s great the man was able to put everything on tape, because telling people how a dog climbed right into your car getting stuck between the windshield and the steering wheel for a while, I guess you wouldn’t buy it.

The dog’s reaction once at the passenger’s seat is as though it’s asking, “Ok, man, now how about that food you offered?”

This has to be one of the funniest videos out there. It’s a must see! 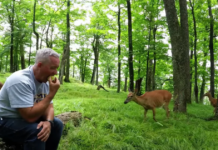 Man enjoys the South Ontario nature and bites into an apple in the woods, not expecting mother deer to bring her fawn over for...

Toddler Gets Too Close to a Baby Gorilla