There is one thing for sure about snow and ice when it comes to winter time, it guarantees that you have equal shares of accidents and hilarity! This is no exception, his icy driveway won’t let him win…

This truly funny video gave so many people aching sides, you can see this guy getting on with his chores, putting out the garbage, well trying to…

He has one unexpected obstacle though, a perilously icy driveway that just completely refuses to let him get to his own gate!

The garbage truck makes its rounds and its routine stop, this English guy goes down to put his trach out. He didn’t bargain for the fight he was about to have. 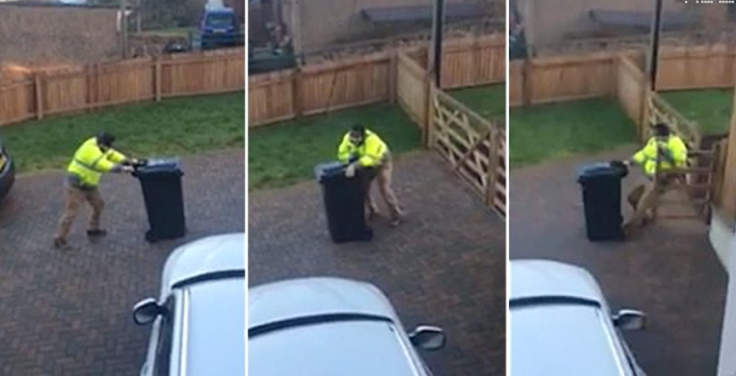 He takes it up to a certain point, then just before the natural incline in his driveway, with his smooth soled shoes let him down. Repeatedly he gets to just the same spot and the trash bin pulls him right back again.

The guy was really determined though, the trash was not about to beat him, his determination to get the trash out really had his family in stitches.

In the end, his wife called him and told him to try pushing the Trash instead of trying to keep pulling it, but that just leads to the most amazing backslides!

As this was all going on the Garbage truck backed out of their alley and started to go down the next lane, but even then the guy didn’t give up, he was so determined.

He opened the gate with one hand then the trash started rolling back again, this time though the guy used the gate to anchor himself, hanging on for dear life!

He was pulled until he was right on the road nearly, but he plain refused to give in in the least bit.

All that battling enabled him to actually pull the trash bin through the gate, then slapped the gate shut!

It just goes to show that determination and persistence pay off, in the end, every time, and while he didn’t catch the Garbage truck that day, he beat it!

He finally pulled the trash can through the gate and slammed it shut.

He may not have caught up to the garbage truck that day, but he conclusively proved that persistence is the key to winning all wars. Even the ones against icy driveways and runaway trash cans!

If you love this hilarious story then please SHARE it with friends and family!