There’s nothing better than snuggling with your baby—most moms of little ones known that. That’s why we love to keep them in our beds with us as we sleep. We know we shouldn’t, but we do it anyway. No harm done, right?

Well, unfortunately, there can be a lot of harm done by letting a baby sleep in an adult bed. Take this unfortunate story about a 6-month-old named Colton, for example.

Parents Paige Ferguson and Blake Linton were hanging out a friend’s house when Colton fell asleep. To allow him to be more comfortable, they tucked him into the friend’s bed, making sure to place pillows all around him for protection.

They were only outside of the room for a short while when Colton rolled off the bed onto the floor. The bed was only about two feet off the floor, but that didn’t matter.

At first, it didn’t seem like Colton was badly injured.

“He had a bump on his head. A bump. He was crying, acting alert and at one point even smiled,” Paige posted in a now viral Facebook post on her wall in March. “Because we are paranoid parents, we decided to get him evaluated. We thought for sure they were going to say he hit his head, has a bump, and he will be fine.”

But to the parents’ surprise and much dismay and horror, Colton wasn’t okay. This was the moment everything in their lives changed forever. “He fractured his skull and bled half of his entire blood volume into his brain,” wrote Paige.

It was heartbreaking for Paige to learn the news. And not only that, but there were nearly 20 doctors and nurses caring for Colton at the hospital he was at in Memphis, Tennessee, and no one would tell Paige for sure that he was going to make it.

“I knew something was wrong when I kept asking if he was going to be okay and everyone kept replying with ‘We will do what we can,’” Paige said. “No one would simply say yes.” 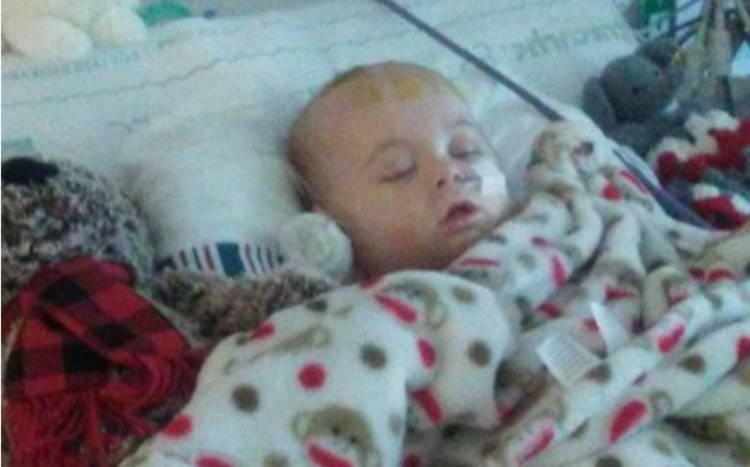 She later found out that Colton was bleeding so much that he went into cardiac arrest. For an entire month, Colton had to endure major surgery as well as an MRI that left some devastating news. It revealed so much brain damage that doctors said he could be in a vegetative state for the rest of his life—that is, if he even survived the injury at all.

Paige posted her Facebook comment as a way to let other parents know to take all kinds of head injuries seriously, even if it’s seemingly “just “ a bump. She doesn’t want anyone else to have to go through something as devastating as she is.

“I don’t want other parents going through this…I don’t want any kid to go through this. Please take any hit to the head seriously. I cant say this enough. My heart is broken,” she wrote.

There is good news: Colton was able to open his eyes in April and doctors released him from the hospital. He’s still using a feeding tube to eat, and is on a range of medications for seizures. There’s hope, but there’s still a waiting game.

“He’s doing okay, as well as he can,” says Paige. “He smiles at us, which is the best thing in the world. But, doctors have explained that we need to understand that Colton suffered a very significant brain injury and in most cases, kids with this injury do not live. He will have a very hard life.”

This type of injury can happen from any type of fall, but it’s certainly worth noting to be wary of putting your child in an adult bed, no matter how safe you think it might be.

Can you imagine going through something so devastating? We’re hoping Colton continues to make progress in his injury and that Paige and Blake are able to find peace during this devastating time.

The Willis family, including Demi Moore and their daughters, got ahead of the holiday festivities