Bored Daddy
Home Amazing When Twin Girls Are Born They Are Full Of Joy, The The...
Share12K
Tweet
Pin
Share
12K Shares

There are some things that when we hear them we are getting prepared for bad news, one of those things is when we hear people say “I’m sorry”, and it generally means they are apologizing in advance for something bad!

In really bad cases when people say it, then it’s a little like a buzz term since there is a huge probability that following it something life-changing is going to happen, forever!

When Jodi Parry and her partner Matt heard those words in the hospital about six years ago, their hearts practically lept, fluttered then missed several beats!

For the two of them, it was the second time around having children, they were both pretty scared about it, but also quite excited too, after a healthy son they were joyful about bringing two little angles, twin girls into the world!

Sadly though their happiness would take a beating and uncertainty would catch them up as the stress built as the births came around finally!

The doctor took the couple into a small waiting room and quietly spoke to them, their world would begin to spin out of control, he started:

The two of them were completely taken back as the doctor explained, hardly able to process what was happening to them and what it would mean, the two girls, Abigail and Isobel, had been diagnosed with a condition that would affect them forever… Down’s syndrome…

They had been trying for another baby for quite some time, even though they had a lovely little boy, called Finlay. Mom Jodi sadly had a miscarriage not long after Finlay’s birth and thought that she was prepared for anything at all!

Unfortunately, though the words of the doctor shocked her, she was not prepared for this!

It wasn’t so much the actual words but more the way the news was given to her, Jodi said that the doctor made it sound like it was a lifetime of doom, like an everlasting punishment.

The two girls were born early and had to stay in the intensive care unit for a full four weeks, things were looking pretty bad at this point.

“That day, I didn’t feel like a mother. I just felt lost and confused. I had bleak visions of the future. I thought we’d be carers until we dropped dead”

From a statistical standpoint, Abigail and Isobel are really rare, the odds of giving birth to twins who are both Down’s Syndrome is one in a million, so super special they are!

Doctors said that the little girls were born with many health issues, Abigail is deaf on one side, in one ear, and Isobel had a hole in her heart… 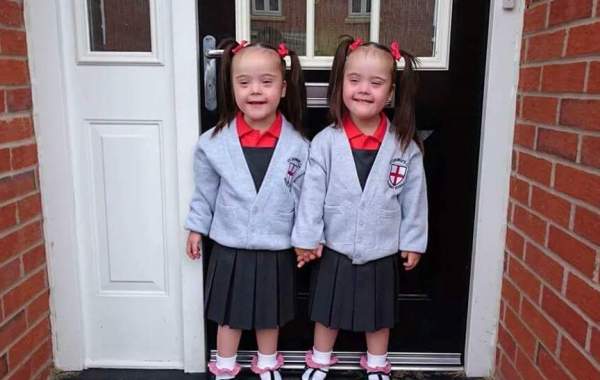 None of what they were hearing was really what they wanted to hear, but they listened and took it all in, Matt an Jodi had no choice, they had to get on and get stuck in and do it as the reality of the situation sunk in.

Even more sadly there was such little information about children with Down’s Syndrom, no one even explained that they could live a normal life like other children and everything else…

They didn’t really realize for a little while because nobody explained to them that their family could really live a pretty normal life together!

This meant that Matt and Jodi were petrified about how things were going to work for them all.

The family had to find out and do everything themselves, the hard way…

Some sympathized and felt sorry for the children, but Abigail and Isobel got along just fine with massive amounts of love and affection by those closest to their family.

“When the doctor took us to one side to give us the results, he said he was sorry that Abigail and Isobel had Down’s syndrome. To this day I’ll never know what he was sorry for”

Present day, six years after the birth, the girls have proven the real prejudices that exist in the world through ignorance and small-mindedness!

Looking at this lovely family who at all could say that they are not completely happy? No one!

There are important lessons we can learn from Matt and Jodi’s experiences:

You really can be happier than you think you can, whatever your situation, even when society tells you that you are less than perfect, you can be very happy indeed!

Anyone with Down’s Syndrome should have the same opportunities as anyone else in life, SHARE and spread the word!