We can believe that we are good people, but as long as we don’t treat the dependable and the vulnerable with the respect they deserve, we are away from the right to be considered humans.

It’s not that we should all be crazy about cats and dogs, but hurting any animal on purpose is the most despicable thing a person can do.

The following is the story of a poor soul that was severely neglected, but turned a real warrior and got out of the situation as a winner.

Back in 2017, two garbage men from Pennsylvania were on the job, and as they were about to press the button and crush the garbage they put into the garbage truck, a sudden scream prevented them from proceeding.

They knew something was very wrong so they opened the track lid and came across a sight that broke their hearts into a million pieces.

A gray cat was laying there, tied up and covered in gasoline. It was petrified and shaking.

Once it was taken at the nearest vet hospital, it was determined that her condition was serious. The cat was malnourished and dehydrated. Actually, the doctors agreed it was the most severe case of neglect they’ve ever seen or heard of. However, they never gave up on Miracle Maisy and provided her with all the help she needed in order to get on her way to recovery.

She got this name because her survival was a real miracle. We hope she will get to spend the rest of her days surrounded with people who love her to the moon and back. 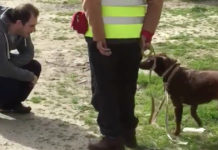