Lisa West Williams was waiting to get off the plane at the airport in Raleigh, North Carolina, never assuming the delay was due to an event that broke her heart and brought tears in her eyes.

That day the body of a fallen soldier was brought home to his wife and family. Along with the video of the touching scene she posted on her Facebook account, Williams wrote, “There was not a dry eye around me.” Honestly, seeing it, we couldn’t help but cry, too.

The members of the military put their life on the line every single day, all for the sake of our freedom, and we can never thank these people enough for the sacrifice they make.

U.S. Army soldier and Warrant Officer Shawn Thomas lost his life during his deployment in Niger, Africa on February 2 as a result of the injuries he suffered in an accident with a non-combat vehicle.

Thomas had been deployed before and spent some time serving in Iraq and Afghanistan. As a Green Beret of the 1st Battalion and 3rd Special Forces Group, he worked in civil affairs and trained troops against terrorism. His dedication and service had been awarded with numerous awards among which two Bronze Stars.

When the casket with Thomas’ body arrived at the airport, covered with the Star Spangled Banner, his wife, T.J. was there to say the hardest goodbye.

The grieving but proud wife kneeled down and put her hand on the casket. Seeing that, onlookers felt heartbroken. They could see right there, in front of their very own eyes just how much military men and women, as well as their families, sacrifice.

Williams’ video spread very quickly and once it got to T.J. she contacted Williams and thanked her for sharing it with the whole nation.

Many thanked Thomas for his service and sent prayers to his family.

“Brave soldier, we thank you for your life and service to our country. God bless you,” one commentator wrote.

The 3rd Special Forces Group also expressed sorrow for the loss of their soldier:

“Our deepest condolences go out to Warrant Officer Thomas’ family, friends and colleagues.”

We would also like to express our gratitude for everything brave officer Shawn Thomas did for our country. Our thoughts and prayers are with his wife and children. 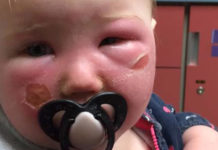 Every Parent Should Read This Mom’s Warning About Aerosol Sunscreens

Teacher Gets Frustrated With One Student’s Dumb Answer