“My heart breaks that I will have to postpone these next few shows.”

Pop singer Justin Bieber left his fans in shock following a recent video which shows that half of his face is left paralyzed due to a syndrome he has been diagnosed with. This comes shortly after he was forced to postpone three shows from his Justice World Tour.

He could be seen having a hard time blinking and smiling normally. 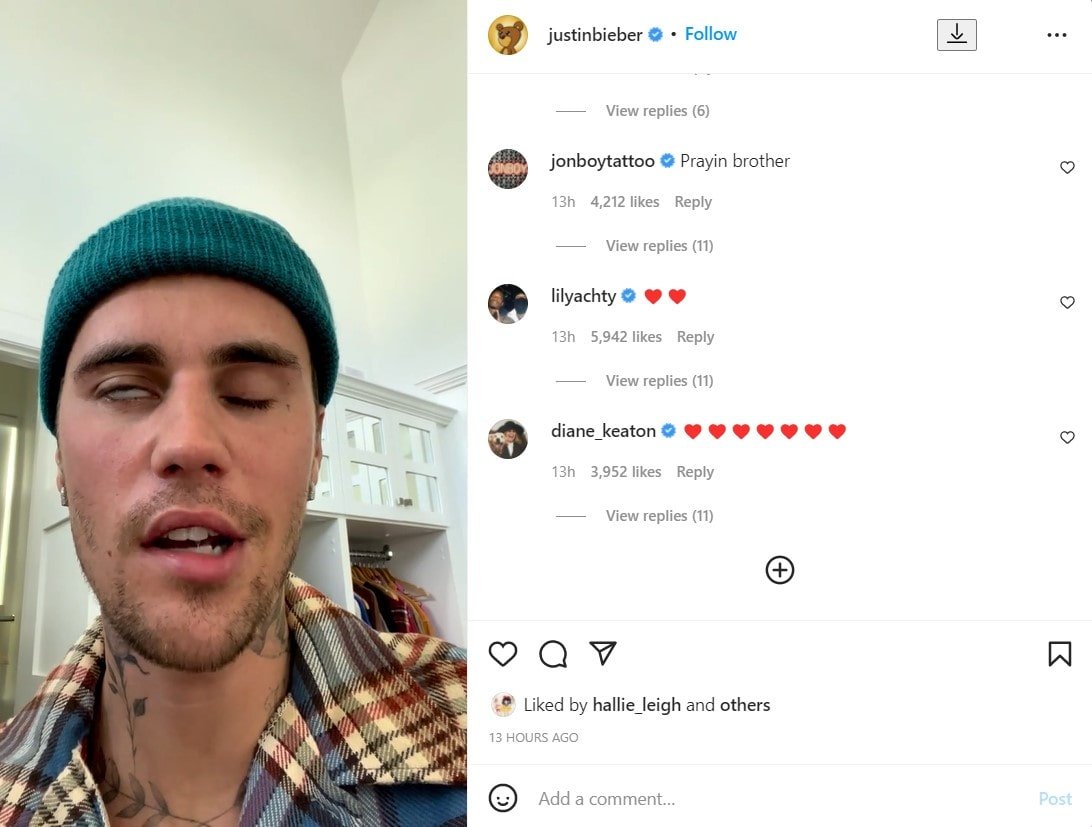 Further, he shared that his condition is getting more severe as he has started experiencing a hard time eating, which leaves him frustrated.
The singer asked his fans to pray for him.
“Obviously, as you can probably see with my face,” Bieber spoke in the video about his condition. “I have this syndrome called Ramsay Hunt syndrome, and it is from this virus that attacks the nerves in my ear and my facial nerves and has caused my face to have paralysis.”

Before he opened up about his condition on Friday, he shared with his fans that “a non-Covid-related illness” had struck him.

“So there is full paralysis on this side of my face,” the singer continued, pointing to the right of his face. “So for those who are frustrated by my cancellations of the next shows, I’m just physically obviously not capable of doing them. This is pretty serious, as you can see,” the Canada-born singer said in the three-minute video.

Ramsay Hunt syndrome (RHS) is a rare neurological disorder characterized by paralysis of the facial nerve (facial palsy) and a rash affecting the ear or mouth caused by the same virus that causes chickenpox (VZV).

“Can’t believe I’m saying this. I’ve done everything to get better, but my sickness is getting worse,” he shared.

“I wish this wasn’t the case, but obviously, my body is telling me that I’ve got to slow down, and I hope you guys understand. I will be using this time to rest and relax and get back to 100 percent so that I can do what I was born to do.”

He added, “I love you guys. Thank you for being patient for me, and I am going to get better. I’m doing all of these facial exercises to get my face back to normal, and it will go back to normal.”

“It’s just time, we don’t know how much time it will be, but it’s going to be okay. I hope and I trust God, and I trust that this is all for a reason. I’m not sure what that is right now, but in the meantime, I’m going to rest, and I love you guys. Peace.”

This year hasn’t been an easy one for Bieber and wife Hailey who earlier in March was admitted to hospital after she experienced stroke-like symptoms. Luckily, she managed to recover in a short period of time.

We hope Bieber will be able to recover fully and continue with his tour to the delight of his many fans. As for now, he obviously needs to rest.

Woman gets $2,500 fine for bringing half-eaten sandwich from Singapore to Australia – ‘I didn’t think I’d done anything wrong’

Pizza delivery guy gets a huge surprise from complete strangers

Mom’s belly won’t stop growing, people don’t believe her when she says how many babies are inside

Remember Julia Stiles? This is why you don’t hear so much about her anymore