Elephants always line up for hugs whenever they see her..

David Sheldrick and his wife, Dr. Dame Daphne Sheldrick, a celebrated author and conservationist, have worked together to care for the wildlife in Africa for many years. They worked hard in order to raise awareness and stop the illegal poaching of elephants for the ivory trade.

However, in 1977, a year after the couple had moved to Nairobi National Park, David Sheldrick passed away suddenly due to a heart attack.

Dr. Dame Daphne Sheldrick decided to continue her late husband’s legacy by establishing the David Sheldrick Wildlife Trust, one of the only three organizations on the continent that rescues, rehabilitates, and releases orphaned elephants.

These orphaned baby elephants have no chance of survival as they are very dependent on their mother for milk during the first two years. It then takes another two years before they are fully weaned.

Dr. Dame Daphne Sheldrick soon developed a special formula which consists of baby formula infused with vegetable fat and coconut oil. Due to the success of her formula, she became the first person in the world to successfully raise a baby elephant.

As most of the baby elephants were severely distressed when they arrive at the sanctuary, they are all each assigned a keeper who accompany the baby elephant inside the sleeping stall to provide them with comfort.

When the baby elephants have reached a certain age, they will be moved to a relocation center in Tsavo National Park. There, they continue to be cared by a keeper and will eventually be released to join the wild elephant communities in the park.

Here is Dr. Dame Daphne Sheldrick’s opinion of elephants: “They’re not corrupted. Their sense of family is as strong as ours. Their memories are amazing and their convoluted thinking and reasoning is equal to that of a human.

The caring and nurturing is far greater in elephants than it is in humans, and loyalty and friendship endures.”

You can watch a video of this amazing story below. 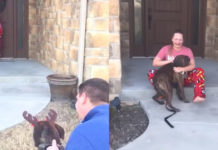