In the Great United States of America being a Police Officer comes with many unexpected challenges and there is a narrow rope to walk between your obligatory duties and doing what is right in some situations.

Under the constant watchful eye of the media, like being in a fishbowl, the job has become more and more difficult in recent years.

There are too many people who are ready to hurt and be violent towards police officers, who just want to do their jobs and go home, and many who want return home to their own family safely at the end of each day. 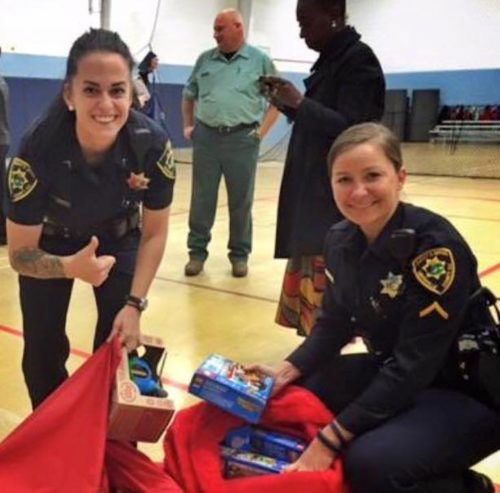 The amazing feeling of capturing the bad people of this world and helping others in need is her passion, helping those around her when things go wrong, by all accounts, she was put here on earth by a higher force!

She patrolled her jurisdiction in Charleston, South Carolina, although one of her most recent encounters was so incredibly powerful that she felt obliged to share it on Facebook.

I was debating whether or not to add this photo because I didn’t want to seem like I was looking for recognition. I don’t care for that. But I think this picture my partner took is too powerful to keep hidden.

And I care to show the good in police work.

This is Priscilla and she is a well-known member of our community. She chooses to sit in an old rotting chair under a bridge every day. Her legs are swollen three times their normal size. She’s mentally ill. She will curse you up and down if she doesn’t like you but she is the sweetest human ever if you get on her good side.

Believe me I spent many of our initial encounters asking her not to call me the ‘B’ word.

I check on her regularly because she has an infection on her foot. The flesh is rotting away, it seeps liquid, and the bugs are constantly inside of it. She refuses to go to the hospital although I have called an ambulance for her several times. 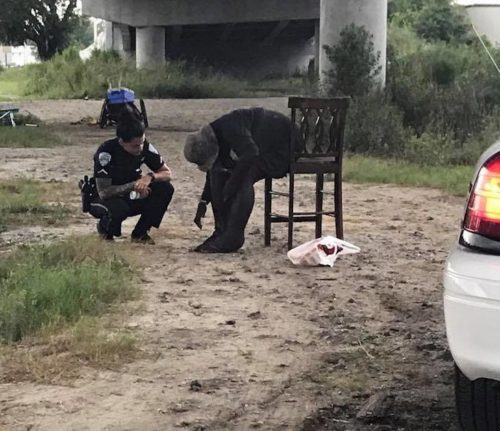 I have begged her to let me take her to the hospital but she’s so stubborn and I can’t force her.

The other day I brought her bactine spray to hopefully help heal her foot and keep the bugs away. She was almost crying because she was so scared it would sting, so I had to spray it for her. I brought her hot cheetos and beef sticks, but she proceeded to yell at me for not getting her pizza.

I absolutely adore this woman, y’all.

She’s one of the most amazing souls I’ve ever had the pleasure of knowing. But as I was kneeling there cleaning her foot, I couldn’t help but think of the song ‘Who Will Be Jesus To Her?’

Sometimes it feels as if the whole world is against my Blue Family. We are hated and wished to be dead. We are called racist murderers, robots and pigs. Yet, out of the public’s eye, we get on our knees in the dirt to show love by washing the feet of those others would reject.

Moments like these are the reason I am so passionate about what I do. I have never felt closer to Jesus than when I don my uniform and serve those who just need to be loved. God put me on this earth to be a police officer. And though we are despised and rejected, my heart remains at peace because I know I’m doing God’s work.

As is every man and woman I proudly serve beside. This is the side of police work you don’t see. This is our every day shift. Don’t forget that we are human, and we are called to serve as well as protect.

UPDATE: I went back and saw Priscilla again today because I was going to bring her medicine, and she had a bandage around her foot. I was informed that for the past month (unbeknownst to me) Charleston County EMS has been making daily checks on Priscilla while I have only been checking on her once or twice a week.

I didn’t know because she takes her bandage off by the time I get on shift because it ‘gets dirty.’ But they provide her with more medical care and attention than I am able to. They also feed and clothe her (today she told me ‘don’t I look sexy in my new dress?’)

I don’t know exactly who responds to her, but they are the ones who deserve the recognition. They are the real representations of Jesus and should be thanked a hundred times more than I. If anyone knows who is assigned to her, please let me know.

Officer Lohnes wasn’t obliged to pull over or help Priscilla, but she knew her work was a true calling, and God’s work!

Looking after Priscilla was a big job but thankfully there were other kind souls also looking after her too, with their efforts all put together, she will get better and better!

Without the work of our men and women in blue, the world would truly be a sadder place.