When the very brave man and women that serve our country come home after months abroad, they have baggage, both mental and emotional. Quite often many of us can’t imagine how these brave men and women carry baggage like this. Many veterans come home with PTSD, Post Traumatic Stress Disorder.

Some seek help for their condition, but there are many that don’t seek help, don’t know how to get help or feel like they should just carry on without help and go unchecked.

William Jazwinski was sure that he couldn’t go through life without getting help for his problems, he was a former Heavy Wheeled Vehicle Operator for the United States Army and he had many terrible and painful memories after months in Iraq.

He really also felt that fighting for his country was an honor and he never removed the flag from his truck, he kept it there, in fact, he was very proud of it, but he never thought that his pride in his service would make him a target of law enforcement officers.

From the account of his tour he was a brave and great honorable soldier, he would have done anything for his fellow servicemen and women. The hot and long shifts in Iraqui deserts along with the demanding training schedules brought the battalions together in ways they never imagined.

William and his team, once they were on a mission, there was truly nothing that could stop them from achieving their objective!

He was dedicated to all of his duties, but it was apparent that his duties took their toll on him. He had seen things that no one should have to see in life, and the time away from his family was hard, but even though it all he was proud to have served his country!

When Williams tour came to an end, he came home and drove his truck with a neatly and correctly folded United States flag on his dashboard. It really was the perfect way to keep reminding himself the well-learned lessons of his service to his country.

William’s perspective about having the flag in his truck was completely different after he had been stopped by the police. Just as the officer’s red and blue lights came on, William looked down to see he wasn’t speeding, what was it all about?

Me: Good morning, Officer. Was I speeding?

Officer: Good morning, no not speeding. Just wanted to stop ya and say thank you for your service.

Me: Oooh the bumper sticker, nice. Your welcome, Sir. My pleasure.

Officer: Where did you serve?

Officer: Well, alright. My son went to Iraq. He didn’t make it home.”

Me: Man, I’m so sorry to hear that. I just finished a PTSD program.

Officer: I see you have a flag in the truck. The one we got for him? Well, it’s at the house. Can I ask a question? Me: Sure.

Officer: Do you mind stepping out and receiving a hug? You remind me of my son. I pulled you over. I thought you were him. I still don’t believe it most days he’s gone.

“With tears in both our eyes, I got out and hugged that man. I’m talking about for a minute or two crying. Down to our knees crying. I needed that. “

“To all the family and friends of soldiers, fighting or that have been fighting, God bless you. Your peace and your hearts. It’s so hard without them, I know. This road is a tremendous one. Love to all.”

The officer just wanted to give William the very well deserved well done and thank you for serving his country, leaving your family to serve your country is truly a difficult thing!

The second that William came home, he took a picture of his flag in his truck (seen above) and then shared it online.

William had no clue that his story of this would inspire so many thousands of other people all around the country.

Since posting his amazing and warm words online, it’s been shared 180,000 times, it’s been liked by more than 210,000 users, wow! The moment between the officer and William has really struck a chord with everyone, so awesome!

Please SHARE this magnificent story with all your friends and family! 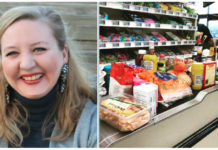 Single Dad’s Card Gets Declined Repeatedly, Then Woman Behind Him Blurts Out Loudly and Makes Him Cry 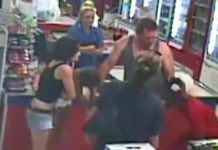 Teen picked up by cop to stay warm after train delayed, soon realizes he’s driving out of town