Nickolas Conrad, a 15 year old boy from Arkansas was woken up suddenly in the night with the sensation of fire on his neck, like he had been set on fire.

The burning was intense, but he hadn’t been set on fire, it was his so called friends that had pranked him, but this wasn’t an ordinary prank, it was much more serious.

“I just want them to leave me alone. They’re not my friends anymore and they’re not going to be”

Everyone is now being warned about a seriously dangerous new thing that is spreading via the internet. 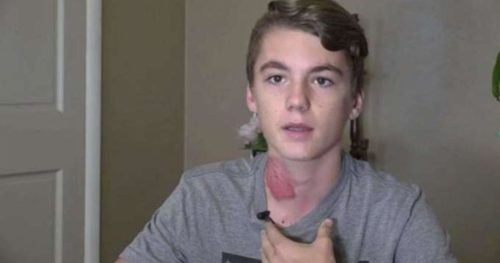 Nickolas was a victim of the insane new trend that is going on.

One particular night after Nickolas had fallen asleep, his so called friends crept to get some boiling water from a microwave. It was really intensely hot when they poured the boiling water on him.

“I felt this really bad burning on my neck and when I woke up and I started screaming and crying. It was the worst pain of my life”

Nickolas’s so called friends had burned him before with a cigarette lighter, he just wanted to be left alone!

“I just want them to leave me alone. They’re not my friends anymore and they’re not going to be”

Nickolas isn’t alone and their are others that have been really badly burnt or injured in this cray trend, an 11 year old girl called Jamoneisha Merrit was burned on her face when her so called friends threw boiling water at her.

In Florida a girl died, she was 8 years old and died because she attempted a version of the hot water challenge, her cousin challenged her to drink boiling water through a straw. Several months after the grave injuries she suffered she died.

Diane Johnson, the aunt of the little girl who died is now trying to raise awareness about this dangerous growing trend, and to make others realize the grave consequences.

“Parents, talk to your kids about these challenges. Don’t just give them your phone and let them go by. Watch what they are doing”

This really must STOP. Please share this article and raise awareness any way you can so parents will talk to their children and make sure they know how really dangerous it is!