When we think of soldiers and military men and women, the first thing that comes to our mind is the sacrifice each and every one of them makes for the country. These people don’t have it easy as they are very often deployed overseas and spend long months away from their loved ones.

The good thing is that we as Americans know how to pay these people the respect they deserve. I don’t think there is a citizen of our country who wouldn’t thank a soldier for their courage, devotion, and commitment to keep America a safe place.

Recently, we stumbled upon a story that restored our faith in humanity and melted our hearts. A woman named Jessica Titus wrote it for Love What Matters and we couldn’t help but share it with you.

She starts by saying how she was taking a flight recently when she spotted an Army soldier walking in front of her. In the next moment, as the soldier tried to take her seat in the economy class, something truly amazing happened. 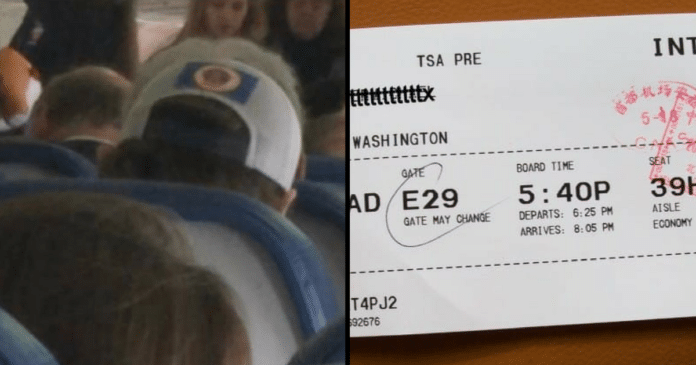 A man from the first class section approached the Military woman and said, “Sorry, ma’am, I’m in your seat.”

The soldier got pretty confused and replied, “What? No—I’m in 31B.” The man then insisted that the place was his and let the soldier take his comfortable seat in the first class. He believed it was the least he could do for someone who was willing to put her life on the line for the well-being of the whole nation.

Titus was deeply touched by the man’s generosity that she decided to do a generous act herself. On a small piece of paper, she wrote a thank you note for the man and put a $10 bill.

Apparently, he refused the money, but was glad to accept the note that reminded him just how much change he made for a soldier and for the rest of the passengers who witnessed his act of kindness.

People agree how everyone should treat any member of the military the same way as this man treated the soldier on his flight.

One person commented, “Respect is never wasted….lead by example….live by good deeds… love unconditionally and never be afraid to step aside to honor others. Lessons are taught through actions not just words and none of us are too old to learn.”

Chrissy Metz, the star of “This is Us,” posts pictures following inspirational weight-loss journey

26 years ago, Patrick Swayze and wife Lisa took the dance stage and stole the hearts of millions

Donna Douglas, who played Elly May on “The Beverly Hillbillies,” spoke of her relation with Buddy Ebsen before passing

Boy suffers severe abuse by stepdad who bursts rocket bottle inside his mouth and forces him to stand facing...

Chris Watts’ older daughter saw him wrapping her mother’s body and killing her sister and begged him to spare...