Getting inside the classroom every day trying to cope with all those students who have different personalities and learn using different strategies isn’t that easy. However, watching a shy student raising their hand and speaking in front of the whole class, or seeing a struggling student getting an ‘A’ makes you realize that it’s all worth it. It requires only special people to be teachers, because not everyone can rise to the task of shaping young minds into compassionate and responsible people who’d be a valuable part of the community.

The ideal teachers always go an extra mile just to make sure their students are doing their best to achieve the most they can. This help usually expands outside of the classroom too. And even if this effort may not be recognized by the parents, the school’s principal, or the community, that doesn’t really mater, because teachers know how great of an impact they make.

One physical education teacher from Valdosta, Georgia was giving his students a lesson in basketball when one of them, a girl named Kristin Paulk, approached and asked him whether he could do her a favor. The teacher said yes even before he knew what she would ask. The girl then said: “Can you tie my hair in a ponytail?” The teacher didn’t think twice before he knelt down and started doing her hair. Meanwhile, a fellow colleague named Kandice Anderson noticed the quite unusual sight and decided to put it on tape. She later posted the video on her Facebook page, writing:

“When your job goes beyond teaching… #CoachO #Love”

Kandice only wanted to show her friends what it really takes to be a teacher, and never did she think the video would be seen more than 3 million times. The phys ed teacher had no idea his kind act vent viral and he became famous. People found this way too adorable, and he was featured on Good Morning America.

“It was shocking to me that it got that much attention because we all do it.”

The teacher has three children on his own so he happens to know how to make a ponytail. He jokes how his expertise in hair styling stops there and if sweet Kristin wanted a more complex hairstyle she should have probably asked someone else to do it for her.

Kristin’s mother was also a guest at Good Morning America where she shared how she felt like after watching the video. She says she is more than happy knowing her girl has a teacher who cares so much.

We hope there are more teachers like this coach out there, who would do anything for their students’ well being.

This video is the sweetest thing you’ll see all day. 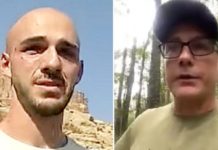