Wildlife photographer Brent Cizek thought the day was a nice one, so he decided to visit Minnesota’s Lake Bemidji hoping to make some nice shots. But what he came across was truly unbelievable and way above all his expectations.

Believe it or not, he stumbled upon a mommy duck with 76 ducklings and people can’t get enough of the video of this truly unusual sight. 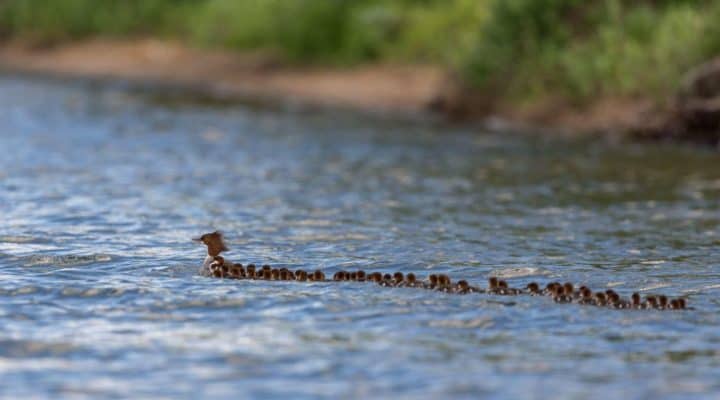 That a single mother can’t possibly lay so many eggs is something we are all aware of, that’s why this case of a mommy duck with so many ducklings is so special, yet not that uncommon in the ducks’ world.

Actually, not all of these sweet babies belong to the duck, but she’s in fact babysitting, or ducklingsitting in this case. The duck is a “crèche” mother.

Speaking with Jillian Mock of the Audubon Society, Cizek confessed how he never though he would see such a sight of so many ducklings getting out of the water one by one as though they were waiting in line to say hi to the camera. He also said how the equipment he brought with him that day wasn’t his best one. Well, only if he knew he was going to make the best duckling video ever.

The ducks were practicing swimming across the lake while their “mommy” was waiting for them on the shore.

Seeing them sprinting in line made it look like they were walking on the surface of the water. Truly breathtaking.

Some of them, however, weren’t feeling that confident and didn’t enter the water. They were just dipping their feet in it every once in a while.

Smithsonian Magazine states that female common mergansers only lay about 12 eggs at a time, which means around that number of babies belonged to this mother duck. The rest belonged to other moms, but this one was in charge of all of them that day.

Bob Duchesne, who writes a birding column for the Bangor Daily News, says that this crèche, “is a form of ducky daycare system which is most typical among birds that breed colonially and whose eggs hatch at roughly the same time.”

It’s obvious this system of bringing up the little ones works, as it allows other moms to get their rest for the day, and their little ones get to be part of a crowd and have some fun time.

However, wildlife experts say that it is still not that common for one mom to take care of so many babies. The numbers reported before are around 50 ducklings, but this brave duck managed to look after 76 of them.

Seeing large groups of animals functioning like this is fascinating. This will help the ducklings learn how to fly in formation later in life.

The video below has to be one of the cutest you have ever seen. Watch it now and you’ll thank us later. Enjoy!

Mom, 36, pregnant with triplets stuns the world with her huge and unusually shaped belly