When Katie Dunkley’s instincts led her to believe there was a problem that day she became a Hero to two dogs, I guess it just goes to show that we can find heros in the most unlikely places.

She had noticed that one of the houses, not far from where she lived, had been abandoned, and even more terrible the owners had left their dogs without food or water inside the house.

Katie made a bold and brave move and broke into the house, where she found the two doggies, starving to death and very distressed. The Local RSPCA took the animals into their protective custody to look after them and closely monitor their health.

“One dog had already been removed from the property, and another was found inside. Both are now in the RSPCA’s care and are being closely monitored”

Shannon Harris witnessed the happenings, she saw Katie going down the street with one of the dogs!

“She told me that she had broken into the house to rescue him. She tried to rescue the female too but she went to bite her so only saved the male”

Shannon discovered that the police had noted that the owner of the house had moved out in March or April and returned infrequently. The poor dogs had been alone for three or four months, it’s no surprise they were so malnourished, it’s a miracle that they are still alive! 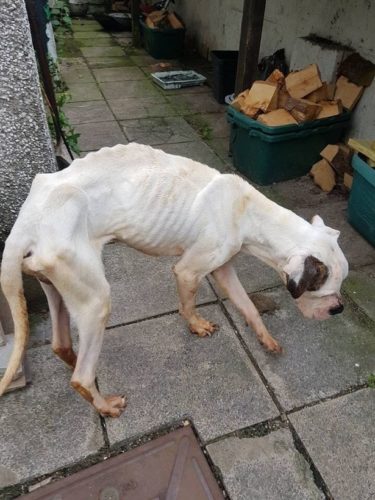 Shannon took some pictures of the poor dogs in their awful underweight condition, ribs showing painfully through, living in such incredibly poor conditions.

Even though the two dogs had been left in the abandoned house and neglected by their owner, they both now have the chance for a new life, all thanks to everyone’s efforts.

And the owner, well the RSPCA are investigating, let’s hope they get the justice they deserve!