One thing that is never acceptable it bullying, and even though time passes by the sting of a bully can last forever!

A guy from Texas stood in front of a board at a school quite recently to explain just that, the impact of bullying on a child…

The Guy, called Greg Barrett started by explaining that his name, in law is Greg Gay, but that, as he said to the board, he was shamelessly bullied as a child because of that name and was at the receiving and of daily, grueling, bullying! 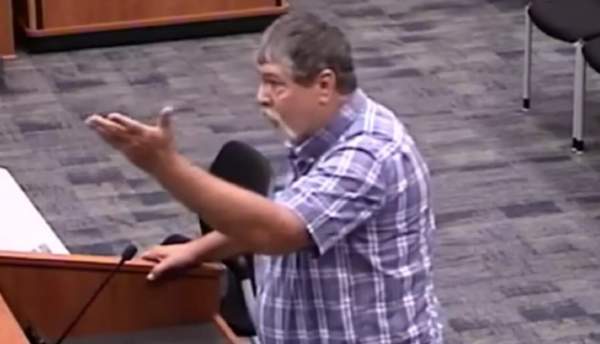 Then he told everyone about one particular day, he sadly remembers it now still it was so awful!

“One day at lunch, I had my head shoved in a urinal where it busted my lip. I laid on the ground in a fetal position as the kids kicked me”

“I got up, rinsed my face off, I walked out of the lunchroom, walked straight to the principal’s office, and he told me that these kids would grow up someday. They won’t always be like this.”

“But yet, here I am, covered in urine from lying on the ground under the urinal. And they sent me home.”

Greg’s story was a really shocking one, but there was more… He admitted to, that evening, getting his fathers gun, from the drawer where he keeps it, and put it in his mouth and contemplated the worse!

He went on to say:

“Because at this point I had nobody — nobody in the school system — to help me…Is that the way this is going to be?”

Then Greg told all of them all exactly what he meant by pointing to Superintendent Lance Hindt and saying:

“Lance, you were the one that shoved my head into the urinal.”

Then, after Greg made his way straight away from the podium, Lance tried to Laugh it off, he wasn’t convincing!

Greg said, just out of view:

”Do you want to debate? Because I got witnesses that were there when it happened.”

Lance said, in his statement:

“As superintendent in three school districts in Texas, I have always tried to create an environment where every student is safe, physically and emotionally. But when an individual impugns my character and reputation as the instigator of those actions, I am disappointed because it simply is not true.”

He also said that the head of the school would have never have allowed these actions to happen.

“I do not suggest that Mr. Barrett was not bullied, only that I was not part of it. Bullying is wrong. Period. It was then and it is today,” the statement concluded.”

Another guy, a businessman also came forward and stated that Lance was a bully all through middle school and high school too!

But even with all that the school board blindly stands behind Lance!

“The board fully vetted Dr. Lance Hindt before hiring him two years ago …His strong leadership and fulfillment of our vision since then has affirmed our decision. We stand united with Dr. Hindt today.”

“People change. They do stupid stuff when they’re young …I just want him to acknowledge it, say he’s sorry and make some changes so this doesn’t continue to happen.”

Please SHARE this story with your friends and family, maybe the SHAME will persuade all to the right thing!