Just thinking about fireworks gives me a little shiver of fear, beautiful but also very dangerous and loud! Each year most of us Americans have a picture of the fourth of July and fireworks, they just go together naturally…

There are many times of the year though that fireworks are used in abundance, the winter holiday season to say one time…

It’s safe to say that as a whole we feel festive over the holidays and quite often we have left over fireworks stored away somewhere. In the United States we have laws for the accessibility of fireworks, however, this really does differ substantially from state to state.

The fireworks themselves are categorized generally and defined as ‘domestic’ or ‘consumer fireworks’ and this is according to the definitions from the Consumer Product Safety Commission (CPSC).

Fireworks even though categorized like this are still very dangerous and any category of firework can seriously damage, cause injury, burn and do a lot of harm to you and others! The CPSC shows the sorts of serious injuries you can get from fireworks… 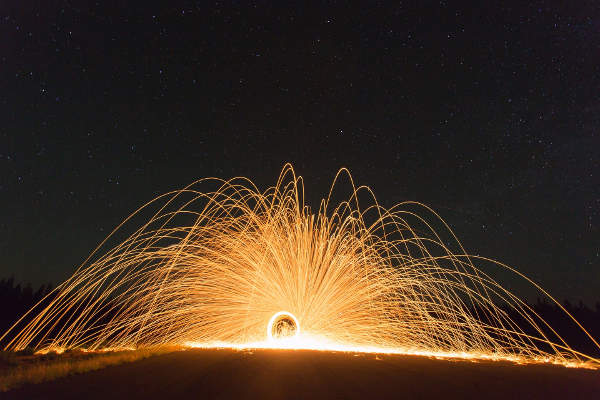 Vulnerable areas on humans are the eyes, hands, and feet, however, it’s not just us humans that are vulnerable! A recent South Daytona, Florida Story shows us that firework injuries are not just limited to humans alone…

Police officers witnessed above all the brunt of this when they came to a complaint about a 58-year-old local resident called Madison Carroll, who lives opposite a family with a dog, a dachshund called Oscar…

Oscar was toddling round one afternoon near his house were he lived, some witnesses say that were other dogs there too. When Carroll saw the dogs he went inside and returned with an M-80 firecracker!

Now if you’re thinking the same as me then it’s not a nice thought at all, and of course, you would be right! Carroll lit the firecracker and threw it at Oscar, witnesses say it was absolutely on purpose!

Charged with animal cruelty and arrested at the scene, according to the news channels he is already out on bond!

“There was just so much blood”

“I thought I was going to lose him, I was covered in blood in five seconds, as soon as I picked him up.”

Just after it happened Kyle rushed the dog to a local animal care facility in Maitland, thanks to their quick actions the doctors now think that they could save his leg, wow, thank goodness!

The police say that Carroll could have been trying to scare the dogs away when he threw the firework and they also said that they could smell alcohol during Carroll’s arrest. I think that if you’re going to throw a firework then you have to, at least at some level, know that it could cause serious injury!

His mother says that she believes that her son didn’t understand fully, the seriousness of his actions? Tell us what you think in the comments, I know what I think!

His mother said to the news:

“I’m very upset with him”

Jasinki did admit that Oscar does occasionally get out, but a family pet like this really doesn’t deserve this kind of terrible injury and pain he went through.

Thankfully Oscar was so tough and so much of a fighter that he was able to fight his way back to health, but let this be a warning to others, this holiday season to be careful in their celebrations, not just for them but for their pets too!

The Consumer Products Safety Commission and its National Electronic Injury Surveillance System reported in 2016 that around 11,000 injuries caused by fireworks were recorded around the fourth of July Holiday alone!

During your holiday, please do take care and for your pets too!

Let’s SHARE this warning tale and hope it does some good.