There seems to be a never-ending issue with poaching. The sad truth is some species are so close to being extinct because of this ‘trophy hunting.’ Often killed for their horns, rhinos are at risk from poaching too.

Recently, rescuers stumble across a mama rhino killed by poachers. They had set upon the baby too. Rescuers found the sweet baby lying next to her dead mother unsure of how to live. 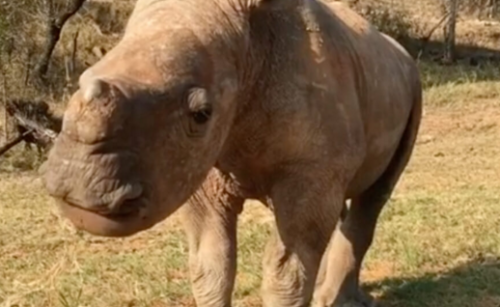 Upon crossing the scene, rescuers realized the baby was still alive. Too late to save the mother, they hoped they could at least save the baby.

They took the baby to Care for the Wild Rhino Sanctuary. The poor rhino was in poor condition. He had one toenail cut to the nail bed, a machete wound on his back, and seemed horrified.

Petronel Niewouldt of the Care for Wild Team said,“It was instinctive for him to try and stay close to his mother to protect her, and the poachers with no sympathy or hesitation whatsoever lashed out at him so that they could finish their heinous crime of taking his mother’s horn as quickly as possible.” 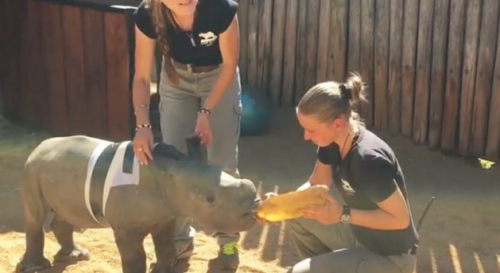 After sedating the rhino, a surgeon operated on the wounds.

The rescuers say that the baby, now named Arthur, is now doing well in recovery. Sadly though, he still searches for his mother. Not understanding she’ll never return, he still calls for her. This sound is heartwrenching.

“He still calls for his mother, it is a heart-wrenching sound and one that he should never have to make. Her death will affect him emotionally long after his physical wounds have healed.”

In the wild, a mother stays with their child for nearly four years. She teaches the baby everything they need to know then. Even if he could have survived the wounds, he would be unable to continue and defend himself.