Being in the army and being deployed can affect the life of the military men and women. It’s not unusual for them to experience difficulties getting used to their old life and be around their old friends. Sometimes they need the help and the support of their closest relatives to overcome the situation they have found themselves in.

Major Diggs Brown served the Army for 30 years. His career in the military includes a tour in Afghanistan that left him with a post-traumatic stress disorder. This man now spends his days in the company of his service dog Arthur, his most loyal companion that never leaves his friend’s side.

“He does a lot of things. He wakes me up from nightmares when I have them. When I have anxiety attacks, he calms me down. He saved my life and I’m even off the drugs.”

Service dogs are allowed to accompany their owners whenever they go, including restaurants and other places. This right is guaranteed by law and the owners of every eatery are required to follow it.

These dogs, unlike therapy animals, go through rigorous training that helps them learn how to behave in public.

Sadly, not everyone is aware of this law and many times people accompanied by their service dogs find themselves in awkward and unpleasant situations.

When Major Brown visited Chicago back in 2015, he was asked by the waitress to leave the French bistro called Cochon Volant because the place apparently didn’t accept dogs in.

He tried to explain that Arthur wasn’t a regular dog, but someone he couldn’t function without, but the employee insisted that he leave and take his dog with him.

As Major Brown said later, he isn’t mad at the waitress because she only followed the place policy and wasn’t aware of the law. This situation triggered the question of the quality of training U.S restaurants’ staff are getting.

He recalls how he politely asked for his breakfast, and once he we turned down, he said:

“This is my service dog, he can go wherever I go, it’s the law,” Brown told the hostess.

“I don’t care, you need to leave, we don’t have dogs in the restaurant.”

Brown didn’t get involved in an argument. He simply got out of the place and headed back home to Fort Collins, Colorado.

But, he couldn’t stop thinking of the incident. He really wasn’t mad at the hostess, but he decided to share his story on his Facebook page just for the sake of raising public awareness of the importance of service dogs.

“When I got home, I posted to my Facebook page, this is what happened to me and it went viral.

Guess this would be a case of ‘No thanks for your service.’”

Soon after, the restaurant owners issued a public apology.

“The Cochon Volant family is both saddened and disappointed to hear this account of a veteran’s experience.”

Yesterday’s circumstance was not a true representation of our company policy and we have begun immediate internal review of protocol, training of staff and ADA regulations to ensure this will never happen again.”

They even donated to Puppies Behind Bars, the organization that provides training for service dogs, among which Arthur himself.

“It’s not my intent to destroy a restaurant but it is my intent to make them aware that they have violated a law that not only affects veterans with dogs, but other people with disabilities with service laws and that they need to be aware that it’s discrimination. They’ve stepped up to the plate and they are going to make some changes at the restaurant so I’m happy in my mind that it is resolved.”

Later, he returned to Chicago once again to take part in a walk hosted by the organization No Barriers that works with veterans with disabilities.

However, we don’t know whether he returned to the restaurant again.

German Shepherd thought her soldier dad abandoned her, but then they met again 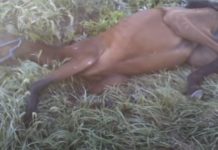 After 22-year-old was killed, his grieving dog stayed by his graveside at his funeral 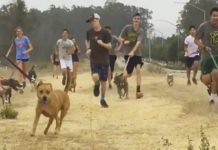 Four dogs block traffic, then drivers realize they are guarding their injured friend 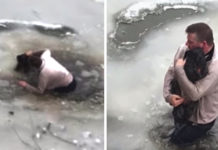