Bored Daddy
Home Amazing Police receive letter from 9 yr old girl, then they notice the...
Share6K
Tweet
Pin
Share
6K Shares
A cop walks into a donut shop…sounds like the start of a joke but it was the start of an unforgettable moment for 9 year old Brooke.

Brooke was standing in line, waiting to buy some donut holes. But when she got to the cashier, she discovered that she didn’t have enough money.

As it turns out, there was a kind stranger waiting behind her – State Trooper Chad Savannah.

What happened next is what has the people’s heart melting all over the internet.

9 year old Brooke describes the scene in a way that we can all relate to.

“I was standing in line and I didn’t have enough money and I’m like, frozen,” Brooke tells The Butler Eagle. “I didn’t know what to do.”

But when Brooke got home, she was able to compose her thoughts, and decided to write a ‘Thank you‘ note to her local police department.  She wanted to thank the unknown trooper for helping her. In the thank you not, she also enclosed a $10 bill to cover the cost of the donuts.

Trooper Savannah and his fellow officers were all impressed by the little girl’s thank you message.

“I think everybody here was very moved by the kindness of this 9 year old,” says the captain of the police department.

“The officers decided that Brooke deserved a reward, and gathered some money together to purchase a $50 Toys R Us gift card for Brooke. They mailed the card to the little girl and figured she would buy some toys for herself. But what she did instead took them by surprise. She purchased $50 worth of toys with the gift voucher and donated them to Toys for Tots.”

When the officer’s found out that Brooke donated all the toys she bought, they decided that she deserved some special treatment. Brook was invited to the police station, where she was given a full tour. Sitting in the police care was her favorite part of the day. 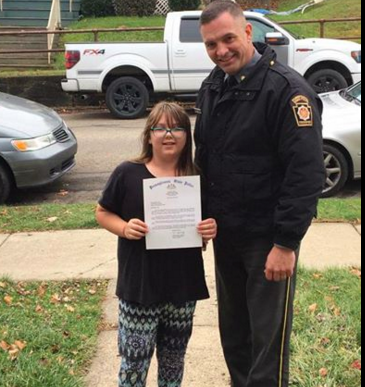 Brooke’s family says that her thoughtfulness was not out of character at all.

“We’re trying to teach our kids right. To take care of what they owe for,” says Brooke’s mom Beth Yost.

Share this story if Brooke’s kind gesture made you smile!