Home Amazing Mom thinks her son got stung by a wasp until his entire...
Share48K
Tweet
Pin
Share
48K Shares

We all love a beautiful summer day full of warmth and sunshine. Enjoying a meal on the patio, hot dogs on the grill, s’mores over a campfire it doesn’t get much better.

Unfortunately, time spent outdoors in the summer does comes with it’s downside and 3-year-old Kristoffer Nordgarden painfully experienced one of them.

Summertime means no shoes, which increases your risk of injuries by accidentally stepping on a sharp object or a bee or even worse….a snake.

When 3-year-old Kristoffer ran to his mother Elisabeth Nordgarden crying one day, she initially didn’t think it was too serious.

“Me and the boys were visiting my grandparents. Kristoffer began to cry a little and climbed onto my lap. We thought he had been stung by a wasp or scratched himself on a branch.”

Elisabeth Nordgarden would have never thought that this would be the most terrifying weekend of her life.

A short 15 minutes after he started crying, Kristoffer’s foot began to swell and turn blue. 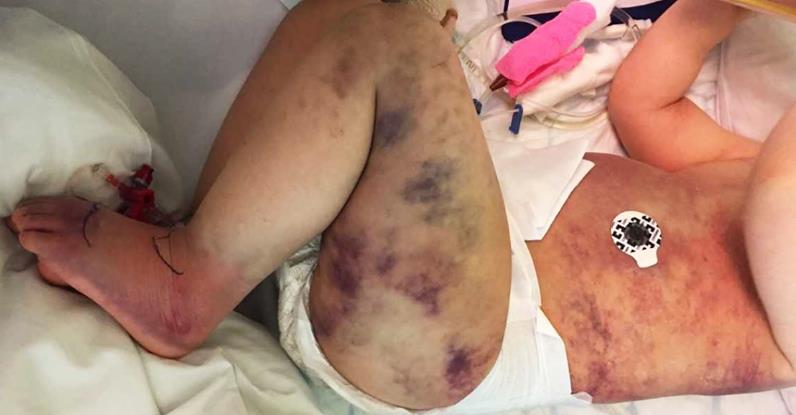 Elisabeth called the 911 the ambulance and helicopter arrived almost instantly. They repeatedly said this is a snake bite…Elisabeth had no idea.

Kristoffer received an antidote when he arrived and began to show signs of improvement. His vital signs quickly began to get worse… then even worse.

It turned out that the boy had internal bleeding in his intestine, his blood value was at a 5 (11 is standard) and he had lost weight (now 33 pounds down from 44)

Soon, Elisabeth began to understand how serious this situation was, and that’s when she really began to worry.

“Vipers are much more active in the summer. More people are also out in nature, and therefore there are greater chances of encountering one”

After a week and a half at the hospital, Kristoffer had survived!  He finally recovered and was able to go home.

Despite everything, in typical 3-year-old fashion Kristoffer was back outside playing the very day he got home.  However, mom is more cautious of the places he plays and the time of day he plays.

“I have much more respect for vipers now and I will ensure that my kids are wear boots when they go out in areas with high grass in the future,” she says.

It’s wise to be extra cautious with vipers or any other venomous animal. Kristoffer was lucky but this could have ended in tragedy.